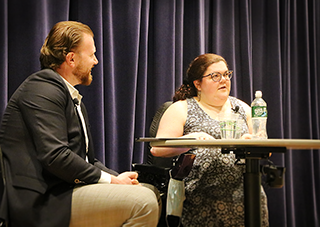 There is no single right way to be an ally or activist in the disability community, argued author and disability advocate Emily Ladau, the featured speakers at an Access:Ability Scholars-hosted event on UD’s campus May 2. “It is deeply personal,” she said, “and none of us will share a definition.”

Ladau shared her message in a conversation with moderator Andrew Jenks of UD’s Center for Teaching and Assessment of Learning. The hybrid event, “Activists & Allies: Disability in Conversation,” was a capstone learning opportunity and celebration of the inaugural cohort of Access:Ability Scholars before graduation later this month.

Individuals with diverse visible and invisible disabilities have unique views of disability, ableism and activism, she said.

“Emily's approach welcomes everyone to join the conversation [no matter where they might be] in their journey of exploring disability identity, relationships, and advocacy,” said Laura Eisenman, professor in the UD School of Education and Access:Ability Scholars program coordinator.

Ultimately, for Ladau, allyship, advocacy and activism are intertwined. She reminded her listeners “not [to] speak for a community, but with a community.

“Scholars have been striving to understand how they can be a better ally,” said Sarah Bailey, one of two Access:Ability Scholars peer mentors and a senior Biomedical Engineering major. “[Ladau] answered that big, looming question that almost all the Scholars have asked at some point.”

After Ladau’s and Jenks’ conversation, the graduating students of the Access:Ability Scholars enrichment program were acknowledged and those on site were called onto the stage to receive honor cords. Bailey and Emily Marsh were handed stoles for their service as peer mentors in the program.

The event was co-sponsored by the Delaware Statewide Independent Living Council, the Freedom Center for Independent Living along with UD’s Office of Institutional Equity, Blue Hen Leadership Program, and Community Engagement Scholars.

Read the full story from Center for Disabilities Studies here.

This entry was posted in News, News from CDS, Outside CDS.