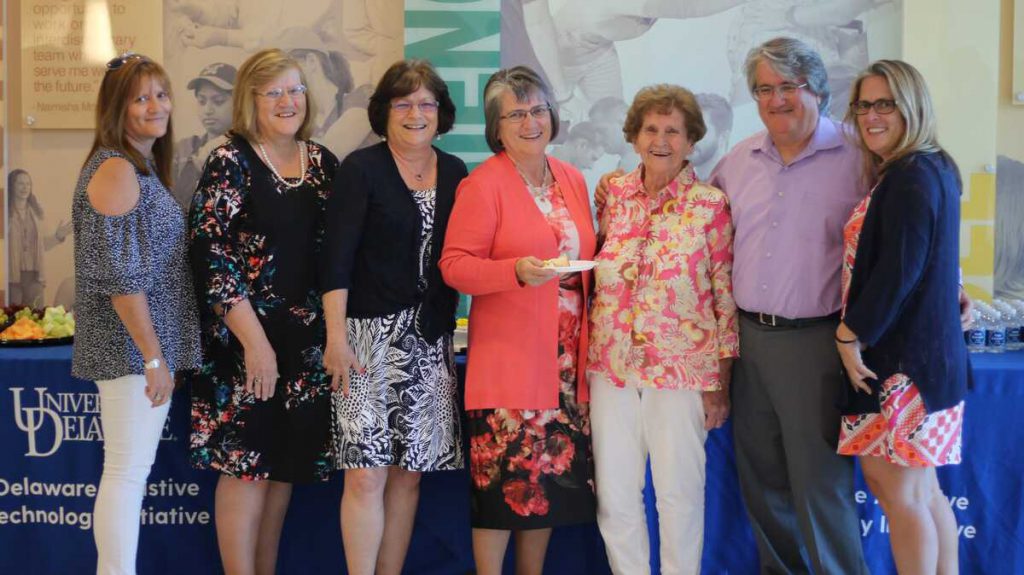 Sonja Rathel (center) poses with her family at her retirement party on UD’s STAR campus.

Sonja Rathel is retiring from CDS’s Delaware Assistive Technology Initiative (DATI) after 27 years serving Delawareans with disabilities. Rathel, who has been with DATI since it came into existence in 1993, also coordinated Delaware’s LIFE and Inclusion Conferences for years and contributed to the Transition Conference.

“The greatest reward has been all the opportunities to change people’s lives, all the times you see someone get excited about a new piece of assistive technology,” says Rathel.

She had many opportunities, as the point person for several CDS assistive technology giveaways. These programs include Borrow-to-Own Low-Vision Devices (BOLD) and the Tobin Fund, which provide devices to people with vision loss or blindness; iCanConnect, which provides technology enabling people with both hearing and vision loss to access telecommunications; and Nowhere Else to Turn, which pays for home modifications for Delawareans with paralysis. Rathel also ran DATI’s AT Exchange, through which Delawareans with disabilities can list devices they no longer need for others to acquire at low or no cost.

“She’s leaving a legacy,” says CDS Director Beth Mineo. “The way our assistive technology program works is in large part thanks to her.”

Known affectionately as the Data Queen, Rathel was renowned for her precise, creative budgets, says Mineo. Kathy McCoy, a former boss and current chair of UD’s Department of Computer and Information Sciences, describes them in a farewell letter as “the best – perfect to the penny and eking out every resource we could get.”

To the budgets – as to all her work – Rathel applied the philosophy “Dirt foot,” an acronym for a lesson drummed into her as a young employee at Perdue Poultry: “Do It Right The First Time.” She was “absolutely driven” to always meet those high standards, says Kathy Hughes, a member of CDS’s advisory council. “Just getting things done.”

Rathel was also a central figure in coordinating the Delaware LIFE and Inclusion Conferences, as well as lending her skills to the Transition Conference. Mary Ann Mieczkowski, the director of Exceptional Children Resources at the Delaware Department of Education, says the Inclusion Conference – which marked its 25-year anniversary in 2019 – may have fizzled without Rathel. “Sonja has been our lifesaver,” said Mieczkowski. “She’s going to leave a huge void.”

Rathel says she plays to spend more time with her family in retirement, especially her grandchildren. “I want to be more available – to be a true grandmother to then,” she says.

This entry was posted in About CDS, News, News from CDS.