Who We Are > CDS Team > CDS team > Karl Malgiero 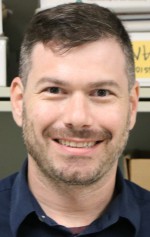 As the communications assistant for CDS, Karl works at updating and creating material for the website, and supporting internal and external communications through email, promotions, blogs, newsletters and various online and offline media. He also assists with audio-visual production for many of CDS’s events, usually with a DSLR camera around his neck to capture all the action, and edits much of the Center’s video content. He joined the CDS team part-time in 2017 and came on full-time a year later.

Karl spends the majority of his free time with his family, and loves hiking, driving on Route 9, shopping for records and enjoying all the art and culture that the region has to offer. Although usually, you can catch him in his Wilmington home reading, cooking or chilling out on the couch.