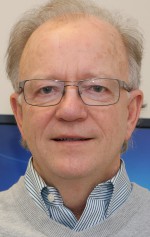 A professor in UD’s School of Education, George collaborates with the CDS-coordinated Delaware Positive Behavior Support (PBS) project on several initiatives that focus on school climate. He is the primary author and creator of the Delaware School Surveys, which are administered annually to assess school climate, bullying and student engagement. He also was the senior consultant and primary writer of a $2.8 million School Climate Transformation Grant awarded to the Delaware Department of Education for 2014–2019, which supports several initiatives to improve school climate and behavioral outcomes for students in Delaware. Currently, he is collaborating with researchers in China, Brazil and Japan, examining cross-cultural differences in school environments.

George lives with his wife, a retired teacher, in Middletown, Del. When he’s not working, he enjoys traveling, sports and especially time with his four grandkids and golden retriever, Winnie the Pooh.